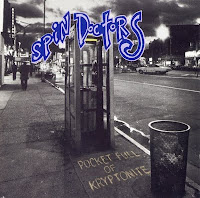 The Spin Doctors hit it big in 1991 with their debut album "Pocket Full of Kryptonite." Their brand of alternative rock was much different than the Seattle-grunge that was taken over rock radio. The Spin Doctors combined elements of jazz and funk into their rock roots and the result was something different that millions of fans appreciated.

2011 marks the 20th anniversary of that landmark album and to celebrate, the Spin Doctors are rereleasing it with a bonus disc with loads of demos and live songs. Not only that, but the Spin Doctors are also touring to celebrate their 20th anniversary as a band. The tour will be making two stops in Connecticut before the year is out. First, they will be appearing at Foxwoods on August 23, then they will return to the state on October 22nd to perform at the Ridgefield Playhouse.

In the meantime, Sony Records will be releasing a remastered 20th anniversary edition of their debut album on August 30th. The clarity on this new release allows you to hear every instrument to the fullest. Some longtime fans will be hearing this album again for the first time in all its glory. The guitar pop of "Jimmy Olsen's Blues," the heavier "Refrigerator Car," and the full-out funk of "Big Fat Funky Booty" will take you back to 1991. But that's not all, a second CD is included that contains the band's first two demo EPs as well as some outstanding live songs like the 12-minute "Shinbone Alley/Hard To Exist." The disc also has some songs that did not make the final album like "House" and "Rosetta Stone." The bonus disc finishes with a very rough sounding live version of the band's first hit single "Little Miss Can't Be Wrong."

While 20 years have passed, their music sounds as fresh and new today as it was back in 1991. For more information on this new release and tour dates, check out the band's facebook page (www.facebook.com/pages/Spin-Doctors/112304700178).
Posted by JP's Music Blog