CD Review: Theory Of A Deadman Come Out With "The Truth" 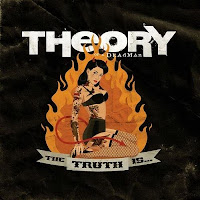 Canadian rockers Theory Of A Deadman are celebrating 10 years together as a band by releasing a new album. The album is called "The Truth Is..." and came out July 12 on Roadrunner Records. The album entered the Billboard Album Charts at #8, selling over 38,000 copies in its first week of release.

The band gets their point across on the album's first two songs, "Lowlife" which is the perfect anthem for people that just don't fit in with normal society. The song's appeal is in its simple, sing-along lyrics, but seems a bit more mainstream pop than some of Theory's past hits. They get a little edgier on "Bitch Came Back," but it still seems to be missing the hard rock edge that the band is known for. The album's third single "Out Of My Head" is perfect for power, pop rock radio. Then the band gets down and dirty with "Love Is Hell," while that old Theory sound comes through in "Drag Me To Hell." I wish more of the album was as heavy as this song. The album then goes soft with the ballads "What Was I Thinking" and "Easy To Love You" before closing with the powerful dedication of "We Were Men."

Check out Theory Of A Deadman on the road now in the US until mid-September. There is also a deluxe edition of the album that includes six bonus tracks and expanded packaging. For more information, check out theoryofadeadman.com.
Posted by JP's Music Blog