CD Review: Tommy Keene Comes Out From "Behind The Parade" 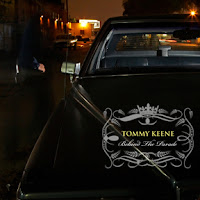 Singer Tommy Keene is not new to the music industry, in fact he has been involved with music for the better part of 30 years. Tommy received a positive outlook early in his career with albums on the CMJ and Billboard charts but, he never received the recognition he deserved. After releasing a retrospective collection last year, Tommy is ready to begin again with his new album "Behind The Parade."

The rawness of the guitar on the opener "Deep Six Saturday" accents Tommy's voice perfectly as the pop lyrics and steady rock beat give the song an upbeat beginning to the album. He continues along the same lines with "Already Made Up Your Mind" and "Nowhere Drag" before switching gears on "La Castana." The moody instrumental breaks up the album nicely without losing the momentum. The second half of the album is made up of short stories like in "Running For Your Life" and "His Mother's Son." The album closes with the gritty rocker "Lies In My Heart."

Tommy Keene's new album "Behind The Parade" will be released on August 30 and will be followed by an eight-date tour. For more information, please check out Tommy Keene's website, tommykeene.com.
Posted by JP's Music Blog