CD Review: The Wagons Move With A "Rumble, Shake and Tumble" 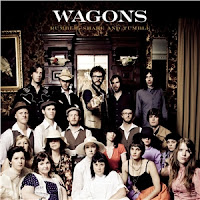 From Australia comes the Wagons with their U.S. debut album "Rumble, Shake and Tumble". Their country, folk, rock-style music sounds like it came straight out of Nashville. The way this group captured the essence of American roots music is uncanny.

The album's lead single "Downlow" carries a Tom Petty swagger with some great pop lyrics that are very addicting. The band moves on to the classic country sounds of "I Blew It" and "Moon Into The Sun". The Wagons pay homage country legend Willie Nelson with an acoustic rocker by the same name as its subject. The band adds a bit of funk to their country flow on"Love Is Burning" before returning with the acoustic ballad "My Daydreams". The song "Follow The Leader" has the band plugging in their guitars to rock as lead singer Henry Wagons goes into Tom Waits-mode. The album closes with "Life's Too Short" which should catch the attention of country radio and the Nick Cave sounding story of "Mary Lou".

The Wagons new album "Rumble, Shake and Tumble" will be released on August 16 through Spunk Records. Also check out the Wagons' new video for their single "I Blew It." For more information on this Australian band, please visit their website, wagonsmusic.com.
Posted by JP's Music Blog