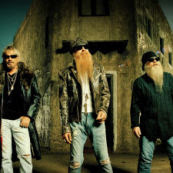 The years have been kind to ZZ Top. Their beards, their cars, their videos and their songs are some of the most iconic in music history. They have not released an album of new music in eight years and they still continue to sell-out theaters and arenas around the world. So, what’s their secret? Well, it’s quite simple…great music. That is exactly what they displayed last Friday evening at the MGM Grand Theater at Foxwoods.

The trio of Billy Gibbons on guitar, Dusty Hill on bass and Frank Beard on drums has been a winning combination for the better part of forty years. The way the three of them get along together on stage is magical and it shows in their music. Gibbons’ extended guitar solos on “Got Me Under Pressure” and “My Head’s In Mississippi” are just jaw dropping. Dusty Hill got his moment to shine on “I’m Bad, I’m Nationwide.” Their choreographed movements from their music videos showed up on stage during “Jesus Left Chicago” and “Cheap Sunglasses.” Gibbons was very talkative with the audience, making sure everyone was having a good time. He proceeded to mention that after forty years together, ZZ Top “hit the big time” by playing in casinos to which he and the band were very excited about. After putting on his “blues” hat, Gibbons, Hill and Beard dove into a couple of cover songs by Willie Brown (“Future Blues”) and Jimi Hendrix (“Hey Joe”). The trio showed their diversity on the California surf-style “Party On The Patio” before returning to the blues on “Just Got Paid.”

Chants of “Z-Z-TOP” echoed through the theater as the band brought the audience to their feet with their famous music video trilogy, beginning with “Gimme All Your Lovin’.” They proceeded with “Sharp Dressed Man,” before bringing out their signature furry guitars for the set closer, “Legs.” Their encore was the perfect one, two punch of “La Grange” and “Tush” that were energized by the drumming of Frank Beard. Ninety minutes is all that was needed to showcase one of the true classic American rock ‘n’ roll bands still at the top of their game.