CD Review: 9 Left Dead Do Right With "The Wrong Things" 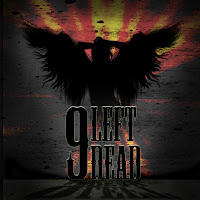 From Oklahoma comes 9 Left Dead with their major label debut "The Wrong Things." They bring the grittiness of the LA streets into the hard rock arena as their sound combines the best of both worlds. Loud guitars, pounding drums, screaming vocals and lyrics about sex, guns and rock 'n' roll...what else could you ask for.

The album's lead single "Put Your Guns Down" is the song that the band originally released themselves that got them their record contract. The song is a perfect introduction to this band's hard rock, in-your-face sound. Their songs are a great combination of big drums, blazing guitars with a simple, but memorable chorus as in "Bad Girl" and "The Wrong Things." The band slows down the tempo, but not the aggression on "Nothing Left To Lose" in order to stress the song's lyrics about fighting back and not giving in. They tackle a cover of The Doors' "People Are Strange" with mixed results as they finish with a couple of the more mainstream rock songs on the album, "In Their Lives" and "The Tracks."

9 Left Dead just finished up their summer tour, but look for more dates to appear as the new album gets released on September 27. Also, check out the band's website (9leftdead.com) for more information on these guys as they explode onto the rock music scene.
Posted by JP's Music Blog