CD Review: Alberta Hunter Gets Immortalized At The Cookery 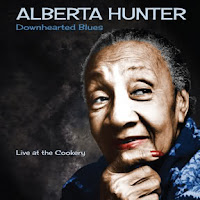 The name Alberta Hunter may not be as well-known at Bessy Smith or Ella Fitzgerald, but Alberta is one of the greatest female blues singers of all time. Her career began in the late 1910's when she was 22 years old. One of her original compositions "Downhearted Blues" brought her acclaim when the song became a hit for fellow vocalist Bessie Smith. She was in and out of record contracts throughout her recording career, but found a home performing for the troops during World War II.

In 1954 she took up a different career in nursing, which lasted until 1977. She was then invited by Barney Josephson at the suggestion of Charles Bourgeious to perform at The Cookery. An initial two-week schedule stretched to an open engagement that made Alberta Hunter a star once again at the age of 82 years old.

Now we finally get to hear one of those amazing shows from 1981 as Rock Beat Records in association with Stuart Goldman Productions is releasing "Downhearted Blues: Live At The Cookery." This recording is one of Alberta's final shows as she passed away in 1984 at the age of 89.

Supported by Gerald Cook on piano and Jimmy Lewis on bass, Alberta begins her show with the up-tempo original "My Castle Rockin'." While her voice has noticeable aged, it only adds to her wonderfully delivery of many classic original and cover songs. Her talk in-between songs is a great piece of history that I'm glad has been preserved in this recording. She performs her big hit "Downhearted Blues" with so much love and care as she puts her heart into this performance. Alberta gives us a saucy rendition of the song "Two-Fisted Double-Jointed Rough And Ready Man" which finds her having fun performing live. Alberta's passion for singing shines on the classic "Georgia On My Mind" as you hear her put everything she has into this performance. The show closes with Alberta Hunter telling the audience to remember your parents as she finishes with the heartfelt ballad "You're Welcome To Come Back Home."

This new live album was released on CD and on 180-gram vinyl on August 30. So, if you really want a taste of some classic, old-fashion blues be sure to pick-up this release.
Posted by JP's Music Blog