CD Review: All The Apparatus Take You On A Wild Journey With New Release 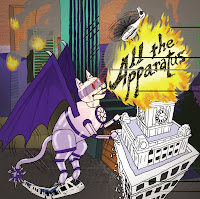 From Oregon comes All The Apparatus with their self-titled sophomore release on Faultvo Records. This 11-piece band creates a sound that is very different from anything out there now. It is very hard to describe without hearing it for yourself. At times it sounds like a Broadway musical gone crazy with pieces of folk, rock and circus music thrown in for good measure, but it works so well.

The new album begins by asking everyone to "gather around" which is what you need to do to experience this music for yourself. It sounds like the circus has come to town on the opening song "Hat Trick" as the band take you on a wild, but amazing journey. The band keeps this moving swiftly with the simply lyrics of "Let's Go Ride Bikes" and the big rock sound of "Aeronaut." Then, they switch gears for the acoustic folk sounding "The Valley" before bringing you down to hell with "Chain's of Damnation." All the song's on this album have a special quality about them, but the one that stands out the most is "Wolf Song" with some wonderfully harmonizing. The song "Human Being" sounds straight from a broadway musical with its big sound and even bigger chorus. The album closes with a fun, mostly instrumental "Pancho Villa" which carries a Spanish flair with shouts of "hey, hey hey."