CD Review: Allele Are Back And Flying "Next To Parallel" 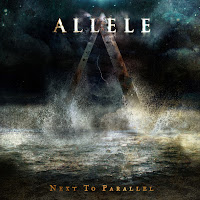 After a six year hiatus, Allele return with a new album entitled "Next To Parallel." After receiving so much praise for their debut album in 2005, Allele hit the road for two years. Their songs have been featured in video games and television shows. In May of this year, the band began to record their sophomore follow-up which was mastered by Paul Lapinski (Yellowcard, Alicia Keys). The new album has a release date of September 27 through Goomba Music.

The new album still carries that hard rock edge that brought them success in the past. The opener "Let It Go" is a energetic, full out rock assault that just gets carried through the whole album. Singer Wally Wood lets his vocals fly on the album's first single, "What I Get" as he shows his passion, screaming the chorus. After tackling the dark subject of "Dead and Cold," the band just takes off with some great hard rock riffs in "Drone" and "Something Cured." Then they raise the bar in "Feed The Wolves" with the perfect combination of pounding drums and blazing guitars. This only gets matched by the aggressive attack of "Stay Down" as these two songs are some of the strongest on this new album.

Allele are beginning their headlining tour in Florida making their way west before returning to the east coast in November. They will be performing live at Bleachers in Bristol, CT on November 10. For a complete list of tour dates, visit the band's facebook page (facebook.com/officialallele1).
Posted by JP's Music Blog