CD Review: Buck Owens Goes Back To The Beginning On "Bakersfield" 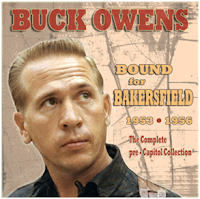 Country legend Buck Owens released his first record in 1961 through Capitol Records. He hit the heights of country music in the mid-sixties and continued through the better half of the 1970s. Now, RockBeat Records is releasing "Bound for Bakersfield: The Complete pre-Capitol Collection, 1953-1956." This release will present the earliest known recordings from Buck Owens on Pep Records.

The set begins with the very appropriate rehearsal of "Blue Love," which later-turns into "Down On the Corner Of Love." The first half of this disc does test your nerves at you sit and listen to multiple takes of the same songs back to back. But, on the flip-side, you get to hear how different the songs could have sounded by just changing the tempo as in "It Don't Show On Me" and "Hot Dog." Owens shows his versatility by changing his tone from reckless rock-abilly of "Rhythm And Booze" to honky-tonk country of "There Goes My Love." This collection also gathers his singles from Chesterfield Records and La Brea. The album finishes with the piano driven "I'm Gonna Blow" which sounds like Owens' attempt at a Sun Records sounding single. Then, Buck Owens will have his first hit record in 1959 with "Second Fiddle" and from that point on his career just takes off and as they say, the rest is history.

This new release from the Buck Owens catalog will be available on September 27. For more information on this album, please visit www.facebook.com/note.php?note_id=247894465241000.
Posted by JP's Music Blog