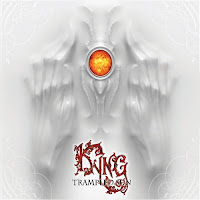 From California comes music's next group in line to take the reigns of rock royalty. The trio of Eddie Veliz (singer, guitarist), Tony Castaneda (bassist), and drummer Pepe Clarke Magana (drummer) are ready to rule the land as Kyng. Their debut album, "Trampled Sun" will hit the streets on September 27 on Realid Records.

The band's sound is huge, especially for a trio. The album opens with their first single "Falling Down" which just a blast of pure hard rock with no gimmicks. The rhythm just motors the song without overpowering it. The tempo gets sped up on "Pushing & Pulling" as Kyng proves they should be considered in the same group as any of today's heavy rockers. The album's second single, "Trails In Veins" proudly displays the talent these musicians have, as Pepe's drums are just a wonder to listen to. The pulsating sound of Eddie's guitar and Tony's bass just blast from the speakers in "I Don't Believe." The band hits on the classic Black Sabbath sound on "Between The Blame" before finishing with the 9-minute epic "The Beauty Of The End/Shoreline pt. 1& 2."

Kyng just finished up tours with The Sword, Black Stone Cherry and Pop Evil and are currently headlining their own tour. Their debut album will be available September 27, do yourself a favor and get reacquainted with classic hard rock. For more information on Kyng, please visit their facebook page facebook.com/kyngrocks.
Posted by JP's Music Blog