CD Review: Jack's Mannequin Introduces Us To "People And Things" 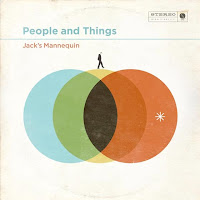 One of this season’s most anticipated new albums comes from Jack’s Mannequin with their October 4th release of “People And Things.” Jack’s Mannequin began as just a side project for singer/songwriter Andrew McMahon. Their first album “Everything In Transit” broke through the Top 40 Billboard Album charts. Then, their 2008 follow-up, “The Glass Passenger,” peaked at number eight on the charts. With the maturity in songwriting found on Jack’s Mannequin latest release, a top five debut is almost a sure thing.

Most of the songs found on “People And Things” deal with some difficult situations. The album’s opening song and first single, “My Racing Thoughts” sounds like a modernized version of Crowded House with an up-tempo beat, while the lyrics speak of lovers turned away in the night. “Television” is a passionate piece of music that deals with harsh things being said after drinking too much and the television is the only thing that breaks the silence. “Amy, I” deals with something that everyone can relate to, the hardship of past relationships. McMahon makes light of the subject of death in “Hey, Hey Hey (We’re All Gonna Die)” while you can’t help be find yourself singing along with the wonderfully simple chorus. The album ends with the heartfelt acoustic ballad “Restless Dream” and the up-lifting “Casting Lines” which showcases the talent of McMahon’s songwriting.

Jack’s Mannequin will begin their headlining tour on October 5th in Hartford, CT performing with the Hartford Symphony Orchestra. From there, the band has dates running through to mid-November. The new album will be available Tuesday so be sure to check it out for yourself. For more information, check out the band website at jacksmannequin.com.
Posted by JP's Music Blog