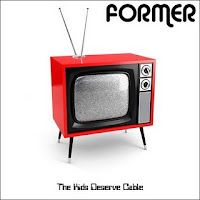 The album begins with the up-tempo rocker "Head Light" which showcases some of Denny Smith's sly vocals while being powered along by Billy Baker on drums. The album carries a great, high-powered rock sound without bringing in any unnecessary pop hooks to carry the music. The songs "Born A Ghost" and "Drown" have a classic rock sound that is sure to bring the band the recognition it deserves. The straight-up rock sound that fORMER delivers is heard all the way through the album's closing song "Come On."

Denny Smith and fORMER have a dates scheduled for September 2 at The Warehouse in Clarksville, TN and October 1 in North Nashville, TN and their new album is available now for purchase. Visit Denny Smith's website for song samples from the new album.
Posted by JP's Music Blog