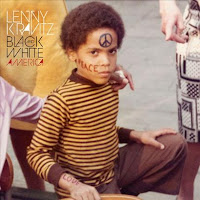 One of today's most innovative artists just released his 9th and one of his most powerful albums to date. Lenny Kravitz is never one to shy away from a memorable guitar riff, but on his latest release, "Black And White America," Kravitz finds comfortable ground to extend his musical legacy.

The album begins with a funky bass groove that sets up Kravitz's long-awaited 70s funk album that has been years in the making. The album's title track is an autobiographical account of his parents struggle, along with history's racial discrimination. The album deals with some serious subjects including discrimination, religion and war, but Kravitz finds a way to express his feelings without bashing the opposition. He receives help on this album from friends like trombone prodigy, Troy "Trombone Shorty" Andrews, Jay-Z and Drake. Jay-Z teams up DJ Military on the hip-hop sounding "Boongie Drop" which is the perfect background for Jay-Z's rapping. "Stand" sounds like a sure pop hit as Kravitz preaches about the positives in life. The funk does fly high on this album with the songs "Superlove" and "Life Ain't Ever Been Better Than It Is Now," and then he brings in Drake for the R&B flavored "Sunflower." The gentle piano ballad "Dream" is a nice break that shows Kravitz's maturity in his song-writing.

Lenny Kravitz is touring extensively in Europe, promoting the new album which debuted at #1 on a couple charts overseas. The album debuted in at #17 on the US Billboard Album charts. Look for Lenny Kravtiz to tour the US in the next year. For any information on Lenny Kravitz and the new album, "Black And White America," check out lennykravitz.com.
Posted by JP's Music Blog