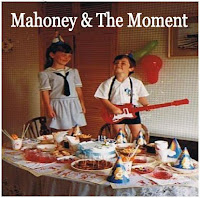 From New York comes the duo of Mahoney & The Moment with their self-titled debut album. The album was self-produced and released on September 9th. Their folk sound is refreshing without over taking their wonderful harmonizing vocals.

Singer/guitarist Steve Mahoney handles the lead vocals on the album's first two tracks "When She Smiles Back At Me" and "Roadtrip." The vocals are so easy to follow that you feel yourself letting their music take you anywhere. Singer/multi-instrumentalist Emily Moment takes over the vocals on the up-tempo country sounding "If You Only Asked Me To." The two trade vocal duties on "Manhattan Girl Again" which draws similarities to the alt-country band Whiskeytown. While their individual vocices alone are comforting, but together Steve and Emily have a more complete sound as displayed in "Come Back For More." The album finishes strong with some of the best songs on the album. First the the slow-build of "Waiting Games," then the up-beat dance rhythm of "Chelsea Fling," before finishing with the acoustic, heartfelt ballad "One More Thing."

Mahoney & The Moment have some shows in California in September before heading to New York for two shows in October. Visit the band's facebook page (facebook.com/MahoneyandtheMoment) for song samples, videos and tour dates.
Posted by JP's Music Blog