CD Review: Paul Kelly Stirs Up Memories With "Songs From The South" 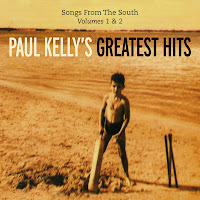 Singer/songwriter Paul Kelly may not be as big a name as Bob Dylan or Bruce Springsteen, but to many of his fans in North America and in his home country of Australia, Paul Kelly is considered a national hero. Now, if you are not familiar with songs of Paul Kelly, then this is your perfect opportunity to find out more about this fabqlous songwriter. Gawdaggie Music, in association with the CEN/RED, is releasing a two-disc greatest hits set from Paul Kelly entitled "Songs From The South: Volume 1 & 2."

The first disc begins with Kelly's 1985 folk single "From St Kilda To Kings Cross." Paul Kelly had a big string of hits beginning in 1986, including his US breakthrough "Darling It Hurts." Twenty songs span the first disc including his Top 20 Australian singles "Before Too Long" and "To Her Door." It finishes with the Australian-only EP single "How To Make Gravy" released in 1996.

The second disc begins with "Nothing On My Mind," the first single from his 1998 album "Words and Music." Kelly has been known as a musical chameleon, tackling many different musical genres including country ("Our Sunshine"), folk ("Every F#%king City"), and rock ("Love Is The Law"). His strength is in his powerful song-writing which gets highlighted on the acoustic songs "If I Could Start Today Again" and "Your Lovin' Is On My Mind." The second disc closes with a pair of unreleased songs, the moody ballad "Thoughts In The Middle Of The Night" and the playful calypso sounding "Shane Ware."

The digital version of this two-disc set was released back on September 6, but a physical version will be released on October 25 through Red Distribution. Paul Kelly is currently on tour in Canada and has two shows scheduled in New York at the end of the month. For a complete list of tour dates and up-to-date information on Paul Kelly, please visit his website, paulkelly.com.au.
Posted by JP's Music Blog