CD Review: Portugal The Man Lands Debut "In The Cloud" 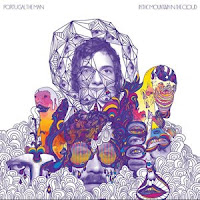 From southern Alaska, comes America’s latest band of psychedelic rockers, Portugal The Man, with their major label debut “In The Mountain In The Cloud.” The band released six independent albums before finding a home on Atlantic Records. The album was released back in mid-July and fell just shy of the top 40 albums chart.

The album’s lead single “Got It All (This Can’t Be Living Now)” is a great introduction to this band’s big sound. Lead singer John Baldwin Gourley proudly displays his falsetto vocals as the band throws everything from horns and keyboards to violins and sound effects to capture their unique sound. The band has a talent for mimicking the rock sound of the seventies as shown in “So American” and “Head Is A Flame (Cool With It).” Their experiments in sound are reflected in “You Carried Us (Share With Me The Sun)” as they conjure a My Morning Jacket vibe on “Once Was One.” Their music is so complicated that even when they bring-out a straight-up rock song like “Sleep Forever” it is still a bigger production that they seem to pull-off masterfully.

Portugal The Man performed at this year’s SXSW, Bonnaroo and Lollapalooza festivals and is still currently on the road. The band will be making their way east through October before heading over to Europe in November. For a complete list of tour dates and album information, please visit portugaltheman.com.
Posted by JP's Music Blog