CD Review: Sarah Pierce Wants To "Bring It On" 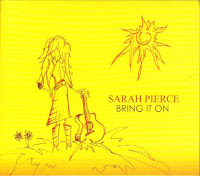 Singer/songwriter Sarah Pierce has released her eighth album entitled "Bring It On." The new album has received rave reviews since its release last month. Prior to the new album, Sarah Pierce has appeared on MTV and also in the Time-Life mini-series, The Wild West. She also did a driving tour of all 250 NPR stations across the country with interviews and live on-air performances.

Sarah's wonderful strong vocals are the first thing you notice on the album's opener "Bring It On." Her sound is the perfect mix of country and folk with just a hint of rock grooves to give the songs a bit of an edge as in "Wild And Gnarly Ride." Her playful lyrics on "Butterfly Tattoo" just captures her spirit and let's the music float along. Her country roots come shining out on "Cowgirls Ride" and "Twenty Dollar Silver Ring." You can't help but get wrapped around her vocals on the ballad "Baby Come Back," while she adds some blues to her country on "I Like Man." Sarah gives us a glimpse to her darker side of song-writing on "Pearl Handled .44" before finishing up with the gentle flow of "May Peace Find You Tonight."

Sarah Pierce has shows lined-up until December, mostly in the Austin, TX area. Check out her website (sarahpierce.com) for a complete list of tour dates, song samples and more.
Posted by JP's Music Blog

I am so glad that you like the record. I think it is great as well. Sarah is an amazing artist - AND - an amazing human. I hope more people read this and take the time to turn in to her music. She is s very worthy of the effort. If you dig it, share the wealth that is Sarah Pierce.