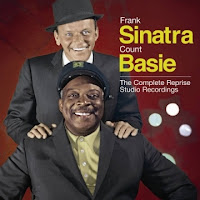 The Concord Music Group is once again releasing a stellar collection of material from Frank Sinatra. This time around it's "Frank Sinatra & Count Basie: The Complete Reprise Studio Recordings." This newly remastered release comprises both albums that Frank Sinatra recorded with Count Basie and his orchestra on Sinatra's Reprise record label.

The first ten songs are from the album entitled "Sinatra-Basie: An Historic Musical First" which was originally released in 1962 and hit the top five on the Billboard album charts. This album featured many Sinatra classics including "Pennies From Heaven" and "I Only Have Eyes For You," but the thing you notice most is the clarity of these recordings. The power of the Count Basie Orchestra is felt in "(Love Is) The Tender Trap" as the horns just blast away the speakers and Frank's voice is just beyond compare.

The second half of this release is made up of the album "It Might As Well Be Swing" which was released in 1964 and hit the Top 20 on the Billboard album chart. On this album, the legendary Quincy Jones lends a hand by arranging and conducting the Count Basie Orchestra. While many of these songs carry a more somber tone, Sinatra and Basie still bring the swing on "I Wish You Love" and " I Wanna Be Around." Even the classics like "The Best Is Yet To Come" and "The Good Life" sound so clear that it's like hearing them again for the first time.

Be sure to pick-up this new release and you will no longer need to listen to those original vinyl albums because the sound on this newly remastered version will just blow you away. For more information on this release and other from the Concord Music Group, visit their website at concordmusicgroup.com.
Posted by JP's Music Blog