CD Review: Son Of The Sun Is Here, "Not There" 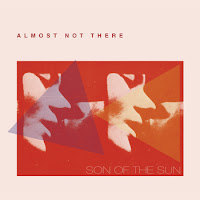 New York band Son Of The Sun recently released their new album entitled "Almost Not There." This album is the follow-up to last year's full-length Son Of The Sun debut album "The Happy Loss."

Their sound on the opening track "As Far As Lucy" is a raw, alternative rocker that gets the album off to a good start. The album's new single "10,000" isn't as energetic as the opener, but has a more accessible, mainstream sound. Their first single off this album, "My Best Mistake" is a gritty, sixties-style song like something The Kinks would have recorded in their early days. The band stretches their sound on the slow, blues of "Fruit Jar" before finishing with the light, airy groove of "Don't Worry."

The band currently have a show scheduled in New York, NY on October 22. Check out their website, sonofthesunmusic.com for song samples from the new album.
Posted by JP's Music Blog