CD Review: Sublime Return With Rome For "Yours Truly" 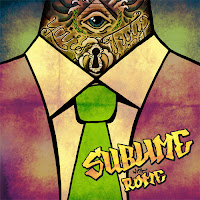 California band Sublime found success with their 1996 self-titled third album, but not before the tragic loss of the band's lead-singer and guitarist Bradley Nowell. Following the demise of Sublime, bassist Eric Wilson and drummer Bud Gaugh created a new band entitled the Long Beach Dub All-Stars which also featured many friends and fellow California musicians. After another short run, the members decided to go their separate ways until 2009 when the two original members came together for a show in Nevada. This time, they invited 20-year, Bradley Nowell sound-alike, Rome Ramirez to join them.

Now two years later the group known as Sublime With Rome released their first album entitled “Yours Truly.” The album debuted in the Top 10 on the Billboard Album charts upon its release in July and has brought hope back into the California ska/punk/rock community.

The album’s lead single “Panic” sounds like the second coming of Brad Nowell on vocals as Rome breathes new life into this band’s great original sound. But, that is where the comparisons end, instead Sublime With Rome create a slightly different California sound than that of the original Sublime line-up. The groove is still present as in “Murdera” and “Same Old Situation,” but Rome’s vocals are very smooth and safe without taking the risks that Nowell would take in order to make the songs stand-out among the rest. The album’s second single “Lovers Rock” has a great updated reggae sound that this trio should concentrate on exploring further. The album ends on a positive note as Sublime With Rome cross the boundaries of reggae, hip-hop and ska on “Can You Feel It” which also features an appearance by new-comer Wiz Kalifa.

Sublime With Rome had to cancel a bunch of their shows in early September, due to problems with bassist Eric Wilson’s shoulder. They still have a couple of dates lined-up in Hawaii in November, but look for the band to return to the road again in early 2012. For more up-to-date information, please visit sublimewithrome.com.
Posted by JP's Music Blog