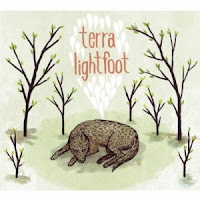 Terra starts off her roots/folk album with the quietness of "Straight Line." She only raises her voice to slightly to show her passion for her music. The great thing is that the song picks up a rock bass/drum groove in the middle of this opening song. She shows us her knowledge of writing different types of music and a bigger talent for combining different musical genres. At times, Terra Lightfoot sounds like the female equivalent to Ryan Adams, by using the softness and loudness of her voice to stress the importance of the lyrics. The alt-country sound of "Sleep Away The Winter" and the fragile, mostly acoustic "Heads, Tails, Tails" show us how different her sound can be. The up-tempo country sounding "Quieter" is a great addition to the album as she almost fully steps into her country boots, but then finishes with five wonderful, thoughtful ballads.

Her new album is available now and she has a few shows lined-up in Canada. If you're in the Hamilton/Toronto area, be sure to check her out. Please visit terralightfoot.com for more information.
Posted by JP's Music Blog