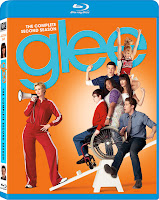 The television sensation known as Glee has taken the country by storm. There have been 11 soundtrack albums released from the show which some have gone on to sell Platinum and Gold status. Glee has also had more than 29 million song downloads since its debut in 2009. The series has been nominated for the Emmy Awards as well as the Golden Globe Awards, winning for Best Television Series – Musical or Comedy.

Twentieth Century Fox Home Entertainment just released the entire second season of Glee on Blu-ray on September 13. You get all 22 episodes from season 2, along with bonus features like the popular “Glee Music Jukebox,” The Making of “The Rocky Horror Glee Show,” exclusive bonus songs and more. Not only that, but you get it all in the highest quality.

While the first season paved the way for something fresh and new, the second season allowed the writers and performers to expand more on their stories and performances. The first disc alone is worth the price of this set. You not only get the season 2 premiere episode, but it also has the brilliant “Rocky Horror Glee Show”, the ode to Britney Spears in “Britney/Brittany” and “Grilled Cheesus” with Kurt Hummel performing an emotional rendition of The Beatles’ “I Want To Hold Your Hand,” and that is just disc one. The other three discs contain hours of great Glee entertainment, from the new holiday favorite, “A Very Glee Christmas” to tackling some tough high school topics like alcohol and sexual preference, but the cast seem to pull it of with ease and even a bit of comedic flair. As you watch each episode, you begin to get more involved with these character’s lives. Plus, the beauty of this package is that you don’t need to wait for next week’s episode because they are all here in these four discs.

Season two also included a load of special guests including John Stamos, Carol Burnett, Gwyneth Paltrow and more. Even Meat Loaf and Barry Bostwick give cameos in “The Rocky Horror Glee Show.” With all that Season 2 of Glee has to offer, you will not be able to wait for the new season 3 which just began. The Complete Second Season of Glee is available everywhere, also be on the look out for Glee Live: The 3D Concert Movie coming soon to Blu-ray & DVD. For more information, please visit foxconnect.com.
Posted by JP's Music Blog