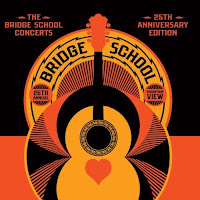 The Bridge School Benefit Concert is celebrating it's 25th anniversary this weekend with a pair of shows at the Shoreline Amphitheater in Mountian View, CA. For the first time, the shows will be shown live through YouTube and Facebook and feature a wide array of artists ranging from Arcade Fire and the Foo Fighters to Mumford & Sons and Tony Bennett.

The whole premise is for some of the biggest names in music to perform acoustically on a simple stage for the audience and members of the Bridge School. The Bridge School started out as a program serving local children with severe physical and speech impairments. Today, it is a place that serves as the international leader in the field of augmentative and alternative communication.

To celebrate the 25th anniversary, Warner Bros. Records is releasing a 2-CD and a 3-DVD collection of some of the greatest performances of the last 25 years. Fans of the show will not be surprised with these selections, but first timers will be surprised by some of the stripped-down versions of many of their favorite songs. Highlights of the first CD include Pearl Jam's reworked version of their hit "Better Man." This version gives us a wonderful, gentle folk sounding song with more concentration on the story within the music. Another amazing song is R.E.M.'s "Country Feedback" with help from Neil Young. The acoustic live setting and Michael Stipe's heartfelt vocals just gives the song so much more feeling.

The second disc has a more diverse line-up beginning with Sarah McLachlin's silky vocals on "Elsewhere" before Paul McCartney brings the party with the sing-along chorus of "Get Back." One of the stranger takes of an original song is Metallica's version of "Disposable Heroes." James Hetfield's vocals are just not made for acoustic instruments, but the song is still interesting to listen to. One of the highlights of the second disc is Brian Wilson performing "Surfin' USA." It's as if he used the music of "Barbara Ann" and replaced the lyrics with those of "Surfin' USA."

The 3-DVD set includes many of the same songs as on the CDs but also adds some extra songs not available on the audio discs. Performances by Bob Dylan ("Girl From The North Country"), David Bowie ("Heroes"), Simon & Garfunkel ("America") and Tom Petty ("Shadow Of A Doubt") are just some of the reasons you'll also need to get the DVD set. The third disc also includes "The Bridge School Story" and "Backstage at the Bridge School Concert" just to wet your appetite even more.

For a complete song list of the CD and DVD sets, please visit bridgeschool.warnerreprise.com. When you're there, will also be able to order a copy of this wonderful collection for yourself and don't forget to check out this year concert live on October 22 on YouTube (www.youtube.com/bridgebenefitconcert), Facebook (www.facebook.com/SupportBridgeSchool) and Twitter (twitter.com/bridgeconcert).
Posted by JP's Music Blog