CD Review: All Get Out Are Ready For "The Season" Debut 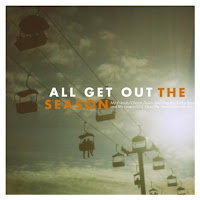 From Charleston, SC comes indie rockers All Get Out with their debut album “The Season.” The album was released back in September on Favorite Gentlemen Recordings and the band is creating a buzz with their creative alternative rock sound.

It is very refreshing to hear a band that is full of energy and heart. All Get Out come storming out of the gate with the album’s opening track “My Friends.” The punk-style drumming and gritty guitar riffs play the perfect backdrop for lead singer’s Nathan Hussey’s straight-on lyrics. The band lightens up on “Lucky Bastard” heading toward a more mainstream approach to some of their songs. Their creativity shines on the up-tempo rocker “Subject To Change” as the build-up chorus and tempo changes keeps the song edgy and interesting. The slow-build of “Girl, Gun” gives us great anticipation for the song’s pay-off of a hard rockin’ chorus. The album closes with over 12 minutes of amazing songwriting. The six-plus minute “Let Me Go” shows another side to All Get Out’s passion for performing, while the almost six-minute closer “Come And Gone” continues on the same path as the band reaches for new heights in their creativeness.

The band will be finishing up their tour with shows in Florida and Georgia, but look for more to come from this rising band. For more information, please visit their website at loudasallgetout.com.
Posted by JP's Music Blog