CD Review: Barefoot Truth Wants Their Popularity To "Carry On" With New Album 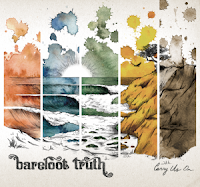 Local Connecticut band Barefoot Truth just recently released their new album “Carry Us On” in September and are already performing live on their headlining tour before going overseas to perform. The new album was released through How We Doin Publishing and continues the buzz they received from their 2010 breakthrough album “Threads.”

The album begins with the up-tempo, acoustic pop sound of “Roll If You Fall.” At times, their sound draws some similarities to Train (“The Ocean”) and other times like Jason Mraz (“Eagle Front.”) Barefoot Truth find their own groove on “Mislead” and “Reach” using simple instrumentation without overpowering the song’s thoughtful lyrics. Their brand of acoustic pop songs hits the heights on the smooth, swaying of “Rope” and the funk sounds of “Reelin.” The album finishes with the wonderfully written “Changes In The Weather” which just makes you want to hear more from this rising band.

Barefoot Truth has opened for music legends Crosby and Nash, as well as Bruce Hornsby and Bela Fleck. Their current tour began in mid-September and will run through mid-November. They recently performed at the Infinity Hall in Norfolk, CT and will return to the state on Saturday, October 29 performing at the intimate FTC Stage One in Fairfield, CT. For a complete list of tour dates and more information on their new album, visit Barefoot Truth’s website, barefoottruth.com.
Posted by JP's Music Blog