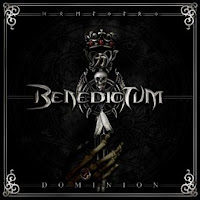 California metal band Benedictum released their third studio album this past March entitled “Dominion.” The album was released through Frontier Records and produced by Grammy Award winner Ryan Greene (NOFX, Megadeth). It also features new members Tony Diaz (keyboards), Chris Shrum (bass) and Mikey Pannone (drums), but the one thing that makes this band stand out is the blazing guitar attack of Pete Wells and the powerfully strong vocals of Veronica Freeman.

The band’s aggressive attack is felt right from the opening song “Dominion” as Freeman lets lose her vocal assault. “At The Gates” is the perfect combination of songwriting that just brings out the band’s full-strength in performing. Freeman shows-off her vocal range on “Seer” while Wells’ guitars lead the way on “Grind It.” The drumming of Mikey Pannone shows us his talents on “Prodigal Son” as he motors the song at a backbreaking speed. This is the band’s first album with a full-time keyboardist as Diaz lends a hand to Wells’ guitar solo instrumental “Beautiful Pain” and is featured in the song “Loud Silence.” The album closes with the 9-minute epic “Epsilon” which brings together the best of all the members in the band.

Benedictum’s new album was just recently featured on VH1’s Classic “That Metal Show” as a “Pick Of The Week” for host Don Jaminson. Lead singer Veronica Freeman commented saying “"The band is extremely honored by this recognition.” The band has two festivals lined-up in Germany and in the US. They will be performing at the Pathfinder MetalFest III on 11-11-11. For more information, check out the band’s website benedictum.net.
Posted by JP's Music Blog