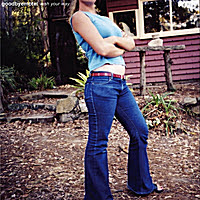 From Australia comes Goodbyemotel with their new EP entitled "Wish Your Way. "The album was produced by Julian Mendelsohn (Paul McCartney, Peter Gabriel, INXS) and has caught the ears of many including Storm Thorgerson (Pink Floyd, Led Zeppelin, Peter Gabriel) who agreed to do the artwork for the band's next full-length album.

Beginning with the buzz guitar rocker "Redroom" the band is moving in the right direction for worldwide success. The band uses the "less is more" approach to the title song as a simple, but effective guitar progression makes the song memorable. Goodbyemotel get their groove on the bass-driven "Remember" before finishing with the Kings of Leon-sounding "Burning Since Sunday."

Some of the songs on this new release have been featured in the shows "Gossip Girl," "Covert Affairs," and "Suits." The band are currently on a break from touring, but with the success of their new EP, look for the band to schedule more shows soon. To download the band's new EP for free, please visit goodbyemotel.com.
Posted by JP's Music Blog