CD Review: Gregg Robins Gives Us "Everything That Matters" 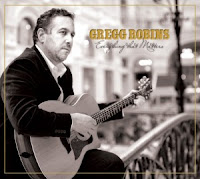 Classical trained musician, Gregg Robins is releasing his debut album “Everything That Matters” on October 25. Robins started out as a classical clarinetist, he then moved on to alto saxophone. His passion now lies in American folk music which is showcased on his new album as he tells of his journey of human emotions and experiences.

The gentliness of his sound is noticed right from the beginning with the opening song “Sounds Of The Day.” His song-writing style draws similarities to Cat Stevens, where each artist would only use the minimal instrumentation to convey the song’s meaning. Robins’ song “Heroes” tells the story of soldiers returning home. He does it masterfully and with such heart and passion, which is hard to capture in song. Robins’ songwriting rarely strays from the mellow acoustic background that only enhances his vocals on the songs “Pages Of My Life” and “If I Could Be There.” Robins’ does plug-in for a couple songs, the up-tempo rocker “Walk Away” and the patriotic “Morning In America.” But, his strength lies in his folk-style storytelling as in “Just What I Needed” and “Angel.”