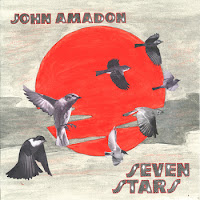 Singer/songwriter John Amadon has recently released is third full-length album entitled “Seven Stars.” The album was self-released and features some of Amadon’s best work yet. After leaving the locally known band Fernando, Amadon took a five-year break from music. Finding inspiration all over, Amadon began writing songs again and with the help of some friends, accomplished his newest release to which he is the most proud of.

The wonderful acoustic, folk rock sound of the opening song “Empty Fiction” is the perfect introduction to those unfamiliar with John Amadon’s music. His sound can be described as the gentle-side of Wilco. The strumming of guitars is the perfect backdrop for Amadon’s lyrics in “Will You Ever Know” and “Bitter Prayers.” He does plug-in every now and then as in “All Patched Up” and “Torn By Livid Ocean,” but is strength lies in his gentle storytelling delivery as in the album closer “Knocking Down Doors.”