CD Review: Jonny Lives! Is Waiting For A "Revolution" 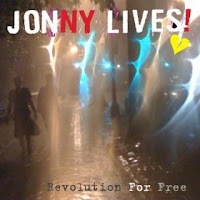 Based out of New York, the band Jonny Lives! have just released their new album entitled “Revolution For Free” on Long Live Crime Records/Rock ‘n Review Records. The album was written and demoed in a macadamia nut factory in Hawaii, and the sound on their new album welcomes that island atmosphere.

Front man Jonny Dubowsky lets his songwriting flow as the album begins with the Ramones-type rocker “Parking Lot,” while the band keeps the energy flowing through “Still Dreaming” and “It’s Not Your Fault (This Time).” Jonny Lives! also shows reflections of The Beach Boys in their harmonizing as in “Makes The Difference” and “Vagabond Lovers.” They also have some influence of the Velvet Underground as the song “Breaking Down” captures that in its sound Their Hawaii island experience shines through on the slightly reggae sounding “My Favorite Song.” The band closes the album with the fun, experimental sounding “350 Times,” in which the band wants you to remember them for future listens.

Jonny Dubowsky has gained support from many major recording artists including Debbie Harry, Fountains of Wayne, Modest Mouse and others for his environmentally safe touring unit of bio-diesel vehicles. Dubowsky also started the Rock ‘n Renew organization which shows students how to become environmentally conscience in their community. For more information on the Rock ‘n Renew organization and on the new Jonny Lives! album, please visit jonnylives.com.
Posted by JP's Music Blog