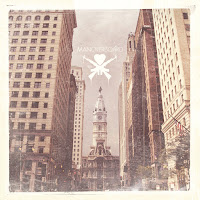 Pop-punk is alive a well according to Man Overboard and their latest self-titled album. The new release is their Rise Records debut and features 12 songs full of punk energy that just keeps the blood flowing. The album was released on CD, LP and even cassette on September 27th.

Right from the album's opening song, "Rare" you can sense these guys have a purpose, which is to keep punk music alive. They accomplish that with many of the songs on this album including "Somethings Weird" and "Not The First." Man Overboard does have a more mainstream sound than other punk bands which should find them a load of new fans. "Picture Perfect" slows down the tempo, but not the passion as they keep the energy flowing right through "Night Feelings." The album closes with the song "Atlas" that begins with a simple guitar chord, then gets built up to blasting finish.

Man Overboard will be on the Pop Punks Not Dead Tour with New Found Glory, Set Your Goals, The Wonder Years and more. The tour begins October 6 and runs through November 20. For a complete list of dates and more information on the new album, please visit defendpoppunk.com.
Posted by JP's Music Blog