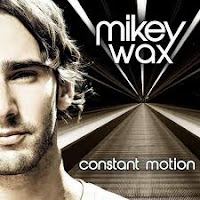 From New York comes singer/songwriter Mikey Wax with his second full-length album entitled "Constant Motion." The album was released at the end of September and reached #47 on the Billboard Heatseekers chart and ranked at #6 on the iTunes Singer/Songwriter chart. The album was produced by Warren Huart (Aerosmith, Kris Allen).

Right from the opening song "Counting On You," you get a feel for Wax's talent for writing exciting pop driven lyrics. His voice is so smooth that he has no problem hitting the high notes on "How It Feels." At times, his voice reflects that of Adam Levine of Maroon 5, especially on the power ballad "Marion." His style also shows glimpses of Jason Mraz like on "No Regrets" and "Fall For You." The great thing about Mikey Wax's songwriting is that whether it is an up-tempo song ("Long Lost Dream") or an acoustic ballad ("You Tell Me When") his vocals, lyrics and sound are spot on for today's music scene.

Mikey Wax is currently on tour with American Idol's Elliott Yamin and will be returning to Connecticut on November 4 at the Toquet Hall in Westport. He has dates line-up until the first of December so check out his website (mikeywax.com) for a complete list of shows and be sure to check out his videos on YouTube.
Posted by JP's Music Blog