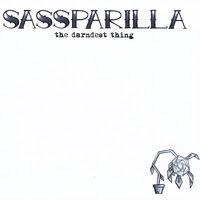 From Oregon comes Americana, folk-roots band Sassparilla with "The Darndest Thing."The new album was self-released by the band as they are seeing an increase in their fan base with each album, beginning with their 2007 debut "Debilitated Constitution."

"The Darndest Thing" begins with "New Love" which is just what you might find listening to this great, rare, on-of-kind sound. "Same Old Blues" sounds like a cross between New Orleans jazz and southern folk storytelling. Their mellow country, backporch sound comes shining through on "Bone Colored Moon" before the band dabbles in the blues on "Overcoat." The song that won me over was their groove on "My First Lover." The song is acoustic folk music with attitude. The album closes with "You’ve Got It Bad" which is what Van Halen might sound like if they unplugged. Plus, with a name like Sassparilla, it is bound to stick in your memory.

The band have a dates scheduled through the end of the year, sticking close to home in the Northwest corner of the U.S. For more information and song samples, please visit sassparillapdx.com.
Posted by JP's Music Blog