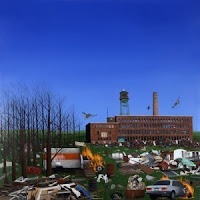 From Pennsylvania comes punk rockers Title Fight with their new full-length album "Shed." The band will be visiting Connecticut on October 19 as part of the "AP Fall Tour" performing at Toad's Place in New Haven. Title Fight are also on yhe cover of this month's edition of Alternative Press.

The band has drawn comparisons to Minor Threat and Fugazi which are on display in the opening tracks "Coxton Yard" and "Shed." Singer Jamie Rhoden wears his heart on his sleeve with his vocal delivery in "Society" and "Your Screen Door." The rest of the band show their energy in the fast-paced punk sounding "Flood of '72." Title Fight try their hand at slowing down their back-breaking attack on "Cresent-Shaped Depression," but their strength lies in their speed and passion as in "Stab." The album closes with "GMT (Greenwich MEan Time)" as the band tries experimenting more with their sound stretching the song to almost the 4-minute mark.

Title Fight's new album "Shed" was produced by Walter Schreifels of Gorilla Biscuits and debuted at #8 on the Billboard Heatseekers chart. For more information on the band and tour dates, please visit their website title-fight.net.
Posted by JP's Music Blog