CD Review: Willie Nile Is In Search Of "The Innocent Ones" 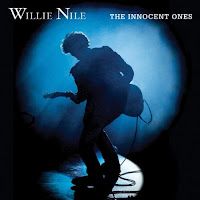 Singer/songwriter Willie Nile has performed with a number of famous musicians including Bruce Springsteen, Ringo Starr and Elvis Costello just to name a few. His new album “The Innocent Ones” was released in Europe on October 11 and in U.S. on October 24 on River House Records. This album shows that even after 30 years in the musical industry, that someone as talented as Willie Nile is still capable of making the best album of his career.

The album opens with “Singin’ Bell,” an up-tempo rocker with a punk-style drumbeat that just rings freedom. You can’t help but get caught up in Nile’s wonderful lyrics, whether he preaching about changing the world in “One Guitar” or telling stories as in “Topless Amateur.” One of the most outstanding songs on this new album is the title song, “The Innocent Ones.” The song finds Nile sending inspiration to those listening to stand-up for what is right and support those who don’t have a voice. He brings back his pop-punk sound on “Hear You Breathe” then slows down for the heartfelt sing-along ballad “Song For You.” His song “My Little Girl” sounds straight from the 1960s pop era that could have been sung by anyone from Paul Revere and the Raiders to The Beatles. The album closes with the gentle acoustic sounds of “Sideways Beautiful” that gives us Nile’s best Dylan impersonation and the mainstream pop sounds of “Far Green Hills.”

Willie Nile has been touring through Europe and will return to Canada the states in November. His new album is ready for pre-order on his website willienile.com. You will also find song samples from the new album and well as tour updates.
Posted by JP's Music Blog