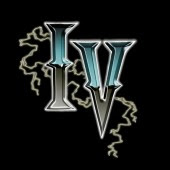 Hard rockers Ion Vein are excited about releasing their first ever digital release entitled "IV v1.0." It is some of the band’s first music since their 2003 release "Reigning Memories." The EP was produced and mixed by Neil Kernon (Queensryche, Nevermore) and is the band’s first release on Mortal Music.

The first song, "Enough" shows us that even after an eight year hiatus, Ion Vein still know how to rock hard with the drumming of Chuck White just motoring through song. White and guitarist Chris Lotesto just lock in a rhythm on "Love/Hate" that is a force to reckon with. This EP is also the introduction of lead singer Scott Featherstone who fits perfectly into the band’s sound, especially on "Anger Inside."

Now, for a limited time, you can download this three-song digital EP for free. Visit the band’s website, ionvein.com, for more information.
Posted by JP's Music Blog