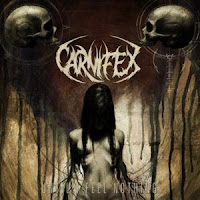 San Diego death metal band Carnifex will invade Connecticut on November 30 performing at Tuxedo Junction in Danbury. They are currently touring behind their latest album entitled "Until I Feel Nothing." After the band received praise for their 2010 release, "Hell Chose Me," they went on to perform over 200 shows before heading into the studio to record their follow-up with Tim Lambesis (As I Lay Dying). Now with their latest album being released last month, Carnifex will solidify themselves as one of the top death metal bands in the world.

A short instrumental intro leads you to the gates of hell before you step through into "We Spoke of Lies" which gets motored by the drumming of Shawn Cameron. The album's first single is the title song "Until I Feel Nothing" which greatly displays lead singer Scott Lewis' growling vocals and the duel guitar attack of Ryan Gudmunds and Cory Artford. The band never lets up at they annihilate your senses with "A Grave To Blame" and "Dehumanize." The album closes with the masterful mayhem of "Curse My Name" as bassist Fred Calderon pounds the strings along with Cameron's speed metal drumming. This new album offers 30 minutes of death metal that ranks up there with some of the finest in the genre.

Carnifex are currently touring as part of the The Discovery Tour along with Born of Osiris and Veil of Maya. Check out the band's facebook page (facebook.com/CarnifexMetal) for a complete list of tour dates that run to the end of the year before heading overseas in 2012.
Posted by JP's Music Blog