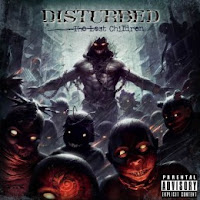 After 15 years of touring and recording, American metal band Disturbed are on an indefinite hiatus which was announced by lead vocalist David Draiman back in July. During the hiatus, the band is releasing a compilation of b-sides entitled "The Lost Children." The songs on this album have been written and recorded during different times throughout the band's career.

The album's first single is "Hell" which originally appeared as a UK tour edition bonus track for the album "Ten Thousand Fists." The one thing I must say is how smooth this compilation flows. Even though the origins of these songs are from all different years, it sounds like a complete album. Two of the more well-known original songs on this album are "A Welcome Burden" and ""God of the Mind," which appeared on the platinum selling album "The Sickness." The oldest song on this release is "Dehumanized," a b-side from the 2002 album "Believe." The album closes with two cover songs, "Midlife Crisis" (Faith No More) and "Living After Midnight" (Judas Priest). The band tries to too hard to sound like Faith No More instead of adding their own touch to the song, while "Living After Midnight" shows that band paying homage to one of their idols.

While we wait for one of America's best modern metal bands to return from their hiatus, fans are at least given somewhat new music to hold them over. For more information on this release, please visit disturbed1.com.
Posted by JP's Music Blog