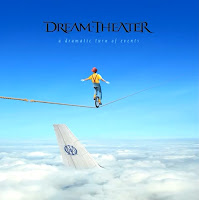 Progressive metal band Dream Theater return with their eleventh studio album entitled “A Dramatic Turn Of Events.” This is the band's first album without founding member/drummer Mike Portnoy. It is also the first album to feature speed drummer Mike Mangini. The album was released back in September through Roadrunner Records and debuted at #8 on the Billboard Album charts.

Dream Theater is known for their great musicianship and epic songs and this album does not disappoint. The album opens with a great introduction piece entitled “On The Backs Of Angels” which showcases the instrumentation of every member of the band, especially keyboardist Jordan Rudess. The band takes a modern metal approach with its grand sound, showcasing the guitar work of John Petrucci, on “Build Me Up, Break Me Down.” Dream Theater dive headfirst into progressive rock with the 10-minute “Lost Not Forgotten.” Petrecci described the album as a “roller coaster ride” and the song “Outcry” is a perfect example with its tempo changes. The album does have its softer sides like the piano ballad “Far From Heaven” and the acoustic “Beneath The Surface,” but sandwiched between is the 12-plus minute “Breaking All Illusions” which follows that classic Dream Theater formula from the past.

Dream Theater has dates lined up out west before heading down to Mexico at the beginning of December. Then the band will spend the first two months of 2012 over in Europe, but look for more US dates in the near future. For more information on Dream Theater’s new album and tour dates, visit their website, dreamtheater.net.
Posted by JP's Music Blog