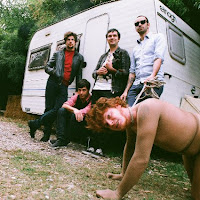 From Italy comes indie rockers Forty Winks with their fourth album entitled “Bow Wow.” Forty Winks burst onto the music scene with their 2001 album “To The Lonely Hearts,” which received great praise from publications like Alternative Press. Now, ten years later and more mature, Forty Winks is experimenting a bit more with an organ and electric piano.

The album begins with a heavy, guitar infused blues rocker “Beneath Her Feet,” which right-away shows a maturity in the band’s songwriting. Forty Winks add just enough pop to their punk-rock sound in the album’s first single “Way Out” to give it a lasting impression on the senses. Their song “I Feel Dead” feels like a 60’s underground, garage rock masterpiece with just enough organ to give it a fresh sound. The band shows their attitude on the edgy rocker “Dirt In The Creek” before returning to the more mainstream sounding “Outta Love.” The album closes with Forty Winks pulling off their best Green Day impression with “Whatever,” before going all-out with the punk-energy of “Ain’t Good Enough.”

The new album was released back in August in the US after a successful launch in Italy back in March of this year. For more information on Forty Winks, please visit their facebook page (http://www.facebook.com/fortywinkslounge).
Posted by JP's Music Blog