CD Review: The Front Bottoms Invading The Space In Connecticut 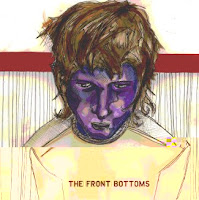 From New Jersey comes the duo known as The Front Bottoms with their new self-titled album. This new release is their debut album on Bar/None Records. To promote their new album, The Front Bottoms are out on the road and will be visiting Connecticut on November 15. They will be performing at The Space in Hamden.

The album overflows with playful lyrics that make you listen more intently to Brian Sella’s vocal delivery as he draws similarities to They Might Be Giants. Their songs like “Flashlight” and “Mountain” are just a reeling of lyrics that don’t necessarily follow a specific story but seem just as interesting to listen to. The other half of The Front Bottoms is drummer Matt Uychich, who’s drumming in the songs “Maps” and “The Beers” give the album an alternative rock atmosphere. The great thing about The Front Bottoms is the way they deliver a song, without adding anything that is not needed to portray the song’s meaning. The most mainstream song on this new release is “Bathtub” that combines a mouthful of lyrics with an easygoing, up-tempo backbeat. The album closes with “Hooped Earrings” that allows the music to breathe a little more without so many lyrics rolling on top of it.

As mentioned earlier, the band is currently on tour in the Northeast promoting their new album. For a complete list of dates and information on the band, check out thefrontbottoms.com.
Posted by JP's Music Blog