CD Review: Gary Clark Jr. Summons The Ghosts Of The Past On New EP 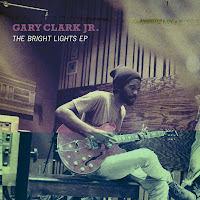 Singer, songwriter, guitarist Gary Clark Jr. did not make a deal with the devil (at least as far as we know) to be able to plays the blues like he does. He does draw up the spirits of Robert Johnson, Jimi Hendrix and John Lee Hooker in order to create his refreshing brand of blues-based rock.

Gary Clark Jr. released his debut EP entitled "The Bright Lights" this past summer on Warner Bros. Records. The album begins with the blazing blues rocker "Bright Lights," which perfectly introduces you to one of the next generation's guitar heroes. His songwriting has southern pop style with a raw, grunge sound as in "Don't Owe You A Thang," which gives Clark's music a more authentic feel. We get invited to hear another side to Gary Clark's Jr's sound on the gentle acoustic R&B flow of "Things Are Changin'." It as if you were a fly on the wall, listening to Clark work on demo ideas that just lead him down the path to the blues. The highlight of this four-song EP is the 8-minute "When My Train Pulls In," which finds Clark channeling the ghost of Jimi Hendrix in this solo performance.

Beginning December 12th, Gary Clark Jr. has half-a-dozen dates throughout the Northeast, including a stop on The Late Show with David Letterman. He full length Warner Bros. debut will be released sometime in 2012, but for now we get these four outstanding songs to enjoy. For more information on Gary Clark Jr., check out his website garyclarkjr.com.
Posted by JP's Music Blog