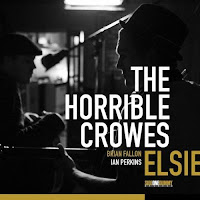 American singer/songwriter Brian Fallon is one of the founding members of the alternative punk band The Gaslight Anthem. In 2011, Fallon started a side-project with his guitar tech Ian Perkins. The new band is called The Horrible Crowes and their debut album “Elsie” was released back in September on Side One Dummy Records.

The sound on this album is a bit of a departure from Fallon’s other band. The folk, acoustic, starkness of “Sugar” and the New Orleans flavored “I Witnessed A Crime” show us another side to Fallon’s songwriting. The songs “Behold the Hurricane” and “Go Tell Everybody” show signs of the energy that Fallon is used to putting in his music, but is it the simple sounds of “Cherry Blossoms” and “Blood Loss” where we find the truthfulness in Fallon’s lyrics. The album closes with his best Bruce Springsteen impression during the soft, storied vocals of “I Believe Jesus Brought Us Together.”

The Horrible Crowes only performed a handful of dates to support the album. For more information on Brian Fallon’s side project, The Horrible Crowes, please visit thehorriblecrowes.com.
Posted by JP's Music Blog