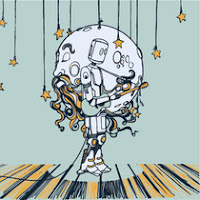 The power-pop trio of Mark's Midnight Carnival Show has returned with a new self-titled album. The nine-track album was released back in September and shows a maturity in the band's songwriting.

The song "Day Dreamer" is a magical combination of the music of vintage Grateful Dead with the lyrical and vocal styling of Jason Mraz. The acoustics of "Invisible" shows us the band's softer, folk-side, while "Dancing" and "The Moon Song" make you want to get-up an groove. They save their best for last with the 6-minute epic "Again," which features the perfection combination of heartfelt lyrics and spot-on music.