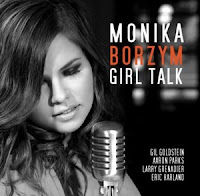 Polish-born vocalist Monika Borzym has released her debut album entitled “Girl Talk” on the Sony Music label. The 21-year old singer has the perfect combination of the voice of Norah Jones and the look of Selena Gomez. Her debut album features a dozen renditions of some of the biggest female names in music like Amy Winehouse, Fiona Apple, Erykah Badu, Dido, Bjork and others. The album was produced by Matt Pierson (Joshua Redman, Kirk Whalum) and arranged by Gil Goldstein (Sting, Wayne Shorter).

“Girl Talk” begins with Monika doing a spot-on cover of Amy Winehouse’s “You Know I’m No Good,” then she takes a pepped-up, jazzy approach to Fiona Apple’s “Extraordinary Machine.” Goldstein’s arrangement of Estelle’s “American Boy” adds a bit of flair that Monika pulls off with ease. She then gets her funk on for Erykah Badu’s “Appletree.” Monika’s voice fits perfectly with Abbey Lincoln’s “Down Here Below,” but she likes to open up and have fun as displayed in “Dry Cleaner From Des Moines.” The album closes with one of the more interesting arrangements by pianist Aaron Parks as he gives Dido’s “Thank you” a jazz club feel. I wish Monika Borzym did more with the vocals, but she plays it safe without adding much to the original.

Then the final two numbers take this already superb album to a new level. 'Beast Of Burden' is about the best song form the Stones from the late 1970s. I got confirmed at the time and was secretly hoping to be given this album as a confirmation present. Instead I got from my parents 'The Oxford Dictionary Of Saints'. Which was probably a more apprppriate choice. But this album remains immeasurably closer to my heart. Irreverent? Yes. But no less brilliant for that