CD Review: Opeth Return To Their "Heritage" On New Release 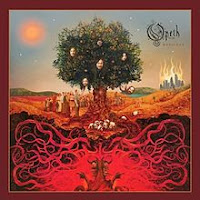 Swedish metal band Opeth have just released their tenth album entitled “Heritage.” The album was produced by guitar/vocalist Mikael Akerfeldt. The album was a commercial success, debuting in the top 20 on the Billboard Album charts. The album is a bit of a departure for the progressive metal band as it does not feature any of Akerfeldt’s “death growls,” and was influenced by a multitude of different artists.

The album begins with a tribute to Swedish pianist Jan Johansson as Joakim Svalberg pours his heart into the 2-minute instrumental. Then the album dives into familiar territory with “The Devil’s Orchard” which discusses the road to evil while using a jazz-break interlude. The song “Slither” is a heavy rocker that pays tribute to the late-great Ronnie James Dio. The band pulls in their influence from King Crimson on the very prog-rock sounding “Nepenthe,” as they build-up to the eight-and-a-half minute epic “Famine.” Opeth find the perfect combination of their hard rock drumming and medieval-style guitar strumming on the experimental sounding “The Lines In My Hand.” The album closes with a gentle, dream-like acoustic guitar solo by Akerfeldt that just bookends the album perfectly.

Opeth are currently on their 2011 Heritage Tour in Europe, before hitting Japan, Greece and South America in 2012. For a complete list of tour dates and more information on their new album, please visit opeth.com.
Posted by JP's Music Blog