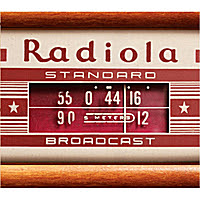 From Texas comes the latest album from singer/songwriter Joe McDermott’s newest band Radiola. The idea of Radiola began many years ago as McDermott and good friend Tom Thornton performed acoustically in coffee shops in search of “the best music earth has ever known.” As years went on, new members joined the band and combined love for acoustic folk-jazz grew together, they decided they needed to get this wonderful sound recorded. The new album entitled “Standard Broadcast” was recorded and produced by Joe McDemott.

They album begins with the gentle acoustic sounds of “Euphoria,” which is what you may feel at times listening to this album. The wonderful harmonizing between the band members just captures the complete essence of Radiola’s sound. Joe’s voice sounds so true and fragile that you can’t help but get lost in his well-thought lyrics in “Edge of the Rhine” and “Gone Is Gone.” The instrumental “Ill Tempered Tiple” shows another side to this band’s sound as they add a bit of flamenco flair, while “Half Glass” gives us the country-side, to their folk-jazz sound. One of the album’s highlight is the heartfelt lyrics of “Chalk” that are just supported perfectly by the gentle music floating in the background. The album closes with some of McDermott’s best songwriting in “Angel’s Eyes” which features Beth Blackerby on violin.