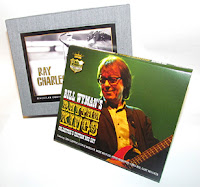 With all the new releases coming out this holiday season, there are two box sets that should be on every music fan’s list. The first CD box set is from “The Genius” Ray Charles and the other from original Rolling Stone bassist Bill Wyman. Both box sets are sure to please long time fans as well as new ones, too.

A new five-disc box set from Ray Charles collects his complete ABC/Paramount singles that were released between the years 1960 to 1973. All 106 songs have been digitally remastered and are represented here in chronological order. The set begins with the first ABC/Paramount’s single “Who You Gonna Love” and continues straight through to his final single “I Can Make It Thru The Days.” The great thing about this set is that it includes both the A and B sides to all of the singles Ray Charles released while on the ABC/Paramount label. Some of the highlights of this box set include his #1 singles “Georgia On My Mind,” “Hit The Road Jack,” and “I Can’t Stop Loving You.” Fans of his music will know most of the songs in this set, but the real treasure for fans are the rare b-sides. This includes his delicate version of “Born to Lose” and a jazzed-up version of “You Are My Sunshine.” Charles also tackled some of the most well-known songs in history like The Beatles’ “Yesterday,” Johnny Cash’s “Ring of Fire,” and John Denver’s “Take Me Home, Country Roads.” One of the greatest things about Ray Charles is that it did not matter what type of genre tha song was originally written in, he would take the lyrics and make the song his own by adding his own elements. This box set was released through the Concord Music Group on November 15.

The second box comes from long-time Rolling Stones’ bassist Bill Wyman. Wyman left the Rolling Stones in the early 1990s, and formed his own band, The Rhythm Kings in 1997. The Rhythm Kings reminded Wyman why he originally fell in love with music, performing great rhythm and blues without worrying about what was popular in today’s music. On November 22, Proper Records in association with Ripple Records will release the Bill Wyman’s Rhythm Kings “Collector’s Edition Box Set.” The set features the first four albums (Struttin’ Our Stuff, Anyway The Wind Blows, Groovin’, and Double Bill) released by the Rhythm Kings between 1997 and 2001. His albums featured many great guests including Peter Frampton on “Tobacco Road,” Eric Clapton on the Stones’ classic “Melody,” and one of George Harrison’s final recordings in “Love Letters.” Wyman himself handles all of the bass and even some of the vocal duties on songs like “Walking On My Own,” “Brownskin Girl,” and “Jellyroll Fool.” But it’s when he hands the vocals off to his other musicians is when songs like “Hole In My Soul” and “Mojo Boogie” really come alive. Fans of the Rhythm Kings who have followed the band, will not find anything here that they don’t already own, but if you are just being introduced to the band, this box set is a great place to start.

So, whether you’re looking for that “WOW!” gift for the music fan in your life, or just looking to treat yourself to some new music, both of these box sets are a great addition to any music collection.
Posted by JP's Music Blog

There are Sly Stone grooves, Philly soul, rockabilly, Rhythm & especially Blues, an upbeat Ray Charles routine, Motown referencing "Happy Together", Marvin Gaye laments and a jazzy Southern marching band to carry us home. That said, this has a modern, edgy sound, cleaning off all sleepiness, played tight and mean. Saadiq has no time for middlebrow revivals. He pursues the heart and social significance of the classics and in doing so produces one himself.