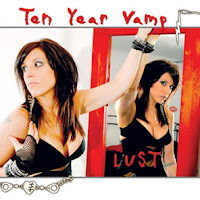 High-energy rockers Ten Year Vamp are back with a new 5-song EP entitled “Lust.” The band’s popularity has really taken off since their 2009 debut album “Don’t Act Like You Don’t Know Me.” They’ve shared the stage with Bon Jovi, Aerosmith and Lifehouse amongst others and have a bunch of head-lining dates running through to December.

The EP starts off with the guitar driven “Got 2 Me” which shows off the band’s potential for writing a great hook-driven pop rock song that showcases the band’s talents perfectly. The song will be featured in the brand-new Playstation video game “A Band” coming out this Fall. Ten Year Vamp go all out on the pop-punk sounding “Thinking of Me” that has lead singer Debbie Gabrione playing the “roll” of the other girl. Gabrione’s vocals become the main focus of the power ballad “No Risk” as she pours her heart into her performance. The hardest rocking song on the album comes near the end with “Making Me Want You” before finishing with the song “Don’t Be Alone With Me.” It was originally written in 2007 for the band’s third EP, but has been re-recorded in 2009 and appears on this latest release.

The band has about a dozen shows scheduled in the Northeast between now and the end of the year. For a complete list of tour dates and information on their new EP, check out their website at tenyearvamp.com.
Posted by JP's Music Blog